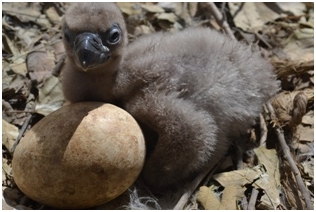 We are pleased to announce that 37 nestlings have recently fledged from three of the vulture conservation breeding centres across India . This comprises 17 Oriental white-backed, 16 Long-billed and 4 Slender-billed vultures. The numbers were again boosted by the artificial incubation efforts at Pinjore, and new trials of ‘chick exchanging’, an exciting new dimension to conservation breeding of vultures

The chick exchange trial was undertaken on several pairs. The first clutch egg (they only lay one) is removed for artificial incubation and hatched in incubators. The chicks are then returned back to their parents on nests in exchange for the second clutch egg which was then incubated artificially. This improves the success rate of the second clutch eggs, as the hatchability by parental incubation of these eggs has been somewhat low. The second clutch nestlings that hatched were hand reared in groups as has been done previously with the first eggs.

Another landmark moment was that one of our first two chicks fledged back in 2008 (named ‘Phoenix’ at a fundraising dinner in London) herself reared her first chick, and then her second egg also hatched in an incubator and fledged successfully!

This long-term commitment to the Conservation Breeding Programme in India can now be seen to be providing real dividends, through the passionate commitment of the centre staff and the dedicated partners and supporters, ensuring we have a healthy population of all species for the ultimate goal of releasing then back into the wild in the not too distant future.