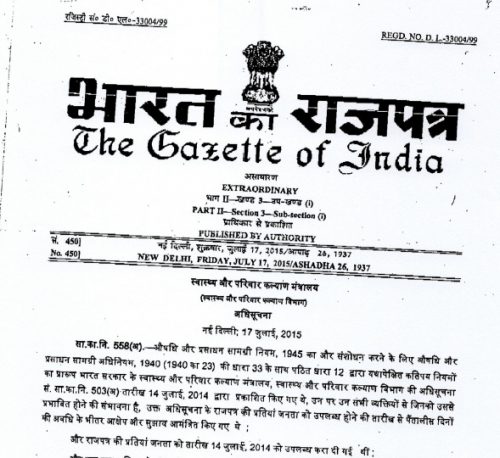 A major step for the future of vultures in India has just been announced on the Ministry of Health website, posting the gazetted notification restricting human formulations of injectable diclofenac to ‘single unit dose pack only’!

The notification takes immediate effect (dated 17 July 2015). The reason this is so significant is that the larger ‘multidose’ vials are the main source of diclofenac illegally used by veterinary practitioners because they are more convenient for treating cattle than using several of the small vials containing a single human dose.
So this step will make illicit veterinary use more difficult. From recent publications (See Cuthbert et al. 2014) we know that diclofenac use by veterinarians has declined considerably since the ban of veterinary formulations in 2006, but unfortunately there is still widespread illegal use. Without further steps such as this, vultures remain under serious threat.

Since SAVE was created it has requested manufacturing companies to cease production of the larger vials. 3ml is more than sufficient for a single human dose, but the majority are ten times this size and ideal dose for treating livestock. Only three companies voluntarily ceased manufacture ahead of this regulation, whilst over seventy companies in India ignored these requests. Health professionals do not think that the banning of large vials poses any significant problems for the legitimate use of diclofenac for treating humans.

Vulture monitoring will need to continue to show what effect this ban will have in the longer term. Checking pharmacies to ensure that large diclofenac vials are no longer for sale, and checking dead cattle and dead vultures for levels of diclofenac are also needed to see whether this step is sufficient to reverse vulture declines. Doing this was essential before plans for releases of the captive birds held at the BNHS breeding centres can progress. It is hoped that Pakistan, Nepal, Bangladesh and other neighbouring countries will quickly follow this example.