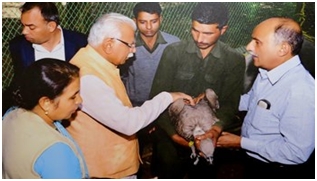 PHOTO: Dr Prakash and his staff show Chief Minister and Dr Amarinder Kaur one of the birds prior to its release into the release aviary.

On 13 Nov 2015, Honourable Shri Manohar Lal Chief Minister of Haryana paid a visit to the centre, to learn about the programme and to assist with the first transfer of endangered vulture species to the release aviary. The Chief Minister was accompanied by Haryana State Forest Minister, Haryana State Forest Secretary, Chief Wildlife Warden Amarinder Kaur and a number of senior Government officials. The entourage was given a presentation by Vibhu Prakash explaining the various steps and history of the Programme and he examined one of the vultures close up (photo), including the tags that are used to monitor the birds once it is appropriate to release back to the wild. Relocating ten of the birds to the release aviary was an important step in the plans for a future release of vultures from this site, once surveys are completed within a 100km radius (including the five neighbouring states) that demonstrate that the environment is sufficiently clear of diclofenac and other toxic drugs to be safe.