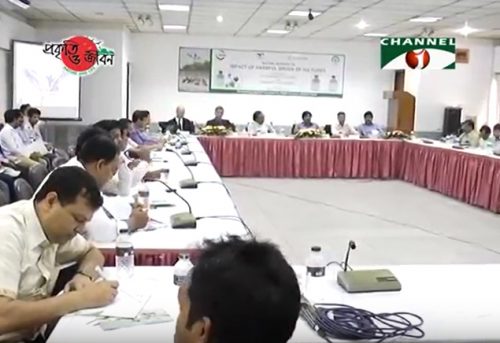 An important step was taken in Dhaka on 10 May 2016 when senior Government officials Dr. Kamal Uddin Ahmed, Secretary, Ministry of Environment and Forests; Md. Nurul Karim, Additional Secretary (Environment), Ministry of Environment and Forests; Mr. Bishwajeet Bhattacharya, Director Planning, Department of Livestock Services; Mr. Ashit Ranjan Paul, Conservator of Forests, Wildlife Circle, Bangladesh Forest Department and IUCN Country Representative Mr. Ishtiaq Uddin Ahmad along with over 100 participants notably from the veterinary and conservation communities met at the invitation of IUCN Bangladesh. Dr Nic Masters (Chief vet of Zoological Society of London) and Chris Bowden of SAVE also presented at the meeting where it was announced that ketoprofen has recently been banned (MoEF has officially issued a letter and formally send to Ministry of Health for action on this ) within Bangladesh’s the two Vulture Safe Zones that are formally recognized by the Bangladesh Government (over 20% of Bangladesh).

Concerns relating to meloxicam were discussed and the meeting agreed that meloxicam provides a viable alternative to both diclofenac and ketoprofen and so should not be a barrier to restricting the licensed drugs to those known to be safe to vultures. It is hoped (in line with SAVE priorities) that this will lead to the first national ban of veterinary ketoprofen which will set an important example for other South Asian countries.