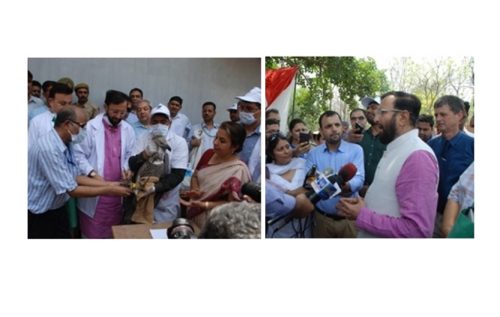 Pinjore Vulture Conservation Breeding Centre was highly honoured to receive Hon Mr Prakash Javadekar, together with Haryana Chief Minister, and also Haryana’s state Minister of forests on 3rd June. The highlight of the visit was the soft-release of two Himalayan Griffon Vultures as a pilot release ahead of plans to release the captive-bred Critically endangered species in future. This visit is further demonstration of Government endorsement and support for the efforts to re-establish vulture populations across India.

The three Ministers also released twelve vultures into a newly built colony aviary which increases the holding capacity of the breeding centre. Pinjore is the national coordinating centre on behalf of India’s Central Zoo Authority. Ten captive-bred vultures from the centre were carefully selected with genetic management objectives and were boxed up for transportation to the breeding centre at Bhopal, Madhya Pradesh. The Honourable Minister handed the keys of the transportation boxes to the Field Director, Van Vihar National Park, Mr A K Srivastava.

The two released Himalayan Griffons took their own time before quietly gliding out of their release aviary the following day, joining the few wild birds in the area. One of the birds has remained close by, and has fed at carcasses provided, and both were fitted with wing-tags, although the permissions to attach satellite tags have not yet been approved to allow longer-term remote monitoring. Despite this, the release is an important learning exercise, and it is important that the tagging approvals will be in place for any future release of the more endangered vulture species.