The 6th Annual SAVE meeting was honoured by the attendance of Drug Authority officials from India, Bangladesh, Nepal, and by video link: Pakistan. The meeting released the SAVE dossiers, highlighting the risks posed to vultures for ketoprofen, aceclofenac, nimesulide and flunixin, and these were ceremoniously presented to Drug authority representatives of each country by David Houston, the SAVE Chairman. 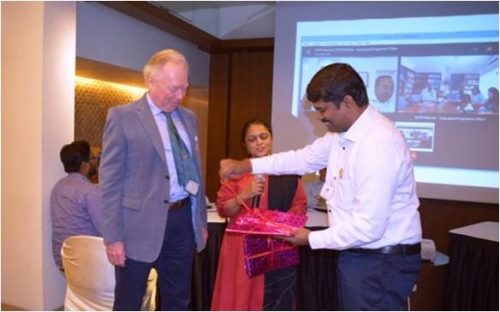 Release of the SAVE nimesulide dossier, accepted by Mr Arunachalam, of India’s Drug Controller General’s office

Among the 45 delegates, we were delighted to host attendees for the first time from Thailand and Iran, as well as two representatives of the Government of Cambodia. The annual update of the SAVE Blueprint was carried out, and the full annual SAVE report will appear shortly, but meanwhile, the updated SAVE Priorities for South Asia agreed at the meeting are:
•Veterinary licenses to be withdrawn for two drugs – ketoprofen and aceclofenac – based on the good existing evidence that they are unsafe for vultures.
•An effective system of regulation of veterinary drugs, based on safety-testing on vultures (protocol already agreed for India) initiated and underway for all current painkillers (NSAIDs) and for all potential new ones entering veterinary practice.
•Evaluate safety of nimesulide and initiate the agreed safety-testing project.
•Identify additional vulture safe NSAIDs (alternatives for the vets).
•Defend and communicate the 2015 multi-dose ban of diclofenac (human formulations) to relevant authorities and stakeholders (India).
•Major efforts urgently needed within South Asia to address the immediate and increasing gap in funding for vulture conservation which now jeopardises the programme.
•Promotion of network and approach of ‘Vulture Safe Zones’ across South Asia with expansion to include trans-boundary cooperative efforts.
•Maintain and support the existing vulture conservation breeding programmes throughout South Asia.
•Create a safe environment for the first soft releases of captive vultures at identified sites (100km radius) in Nepal and India in 2017, requiring satellite monitoring of the released birds.
•Improve availability of well-formulated meloxicam products thereby facilitating their popularity with veterinary practitioners.
•Seek to engage and exploit synergies of SAVE activities with Convention of Migratory Species’ Vulture Multi-species Action Plan.
•Closely support National Vulture Recovery Committees and the ‘Regional Steering Committee’ in order to facilitate the urgent implementation of the 2012 Delhi Regional Agreement and SAVE priorities.