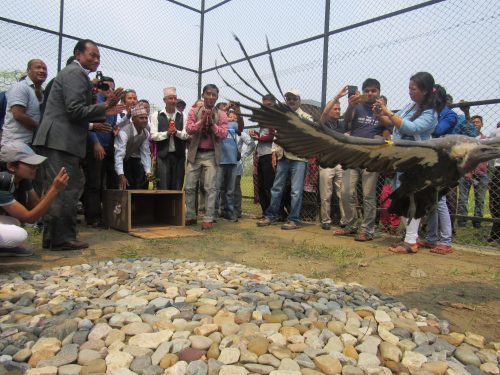 The Vulture Conservation Breeding Centre was established in Chitwan National Park in 2008. The Centre is a collaborative project of the Department of National Park and Wildlife Conservation (DNPWC)/Chitwan National Park, National Trust for Nature Conservation (NTNC) and Bird Conservation Nepal (BCN); with its main and continuous support from the Royal Society for the Protection of Birds (RSPB). Each vulture has been fitted with a satellite transmitter, ready for monitoring movements after their release to the wild later this year. In the pre-release aviary these vultures will exercise their wings and interact with wild vultures feeding which are also fed beside the aviary, prompting social contact between them. The door of the pre-release aviary will be opened later in the year, and the vultures will be allowed to quietly leave when they are ready. 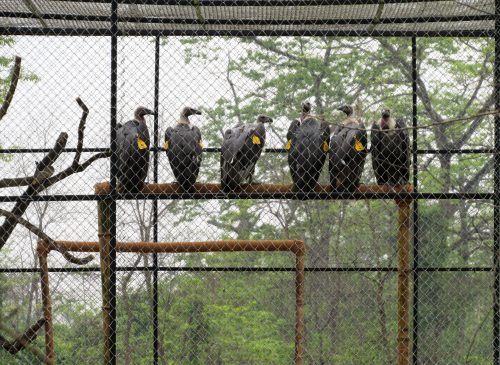 It is the vultures that will show us whether the ‘Vulture Safe Zone’ is truly vulture-safe; which is why the BCN team is using satellite telemetry to track the vultures remotely and in the field and discover the reasons for any problems. One week earlier, the expert team fitted satellite transmitters to six wild adult White-rumped Vultures in Pithauli, Nawalparasi, buffer zone of Chitwan National Park. These vultures are all alive and well, and have been seen attending animal carcasses at the ‘Jatayu Restaurant’, Vulture Safe Feeding Site nearby.

“We will track the captive-reared vultures and compare their behaviours and survival with that of wild vultures we are also tracking” said Dr. Narendra Man Babu Pradhan, CEO BCN. We can even rescue any tagged vultures that need veterinary or husbandry care; and most importantly, retrieve any that may die to determine the cause of death and allow us to respond to that threat. Over the next three years, we will deploy more satellite transmitters on wild vultures and captive vultures that are to be released.” 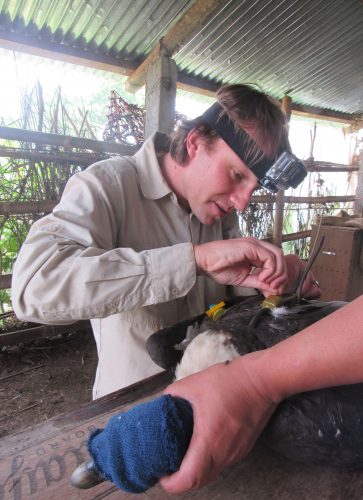 As well as the release birds, six wild birds were satellite-tagged recently so we can learn about their movements and survival.

Initially, released vultures are not expected to leave the area, as they will take time to build up strength in their wing muscles. They will socialise, feed and roost with wild vultures at the Vulture Safe Feeding Site.

“Eventually, the released vultures will hopefully fly away to find additional food and breeding sites in Nepal. In this way, these vultures will evaluate both Nepal’s captive breeding programme and provisional Vulture Safe Zone” said Man Bahadur Khadka, DG, DNPWC.

Govinda Gajurel said “the nine hatchlings at the VCBC this year bring cheers for all the conservation partners as well as all vulture well-wishers.”

After the release, a formal program was chaired by D B Chaudhary, Coordinator, Jatayu Restaurant, Pithauli, Nawalparasi, delivering a brief on the details of the vulture release process and objectives, together with Krishna Bhusal, Vulture Conservation Program Officer, Bird Conservation Nepal. 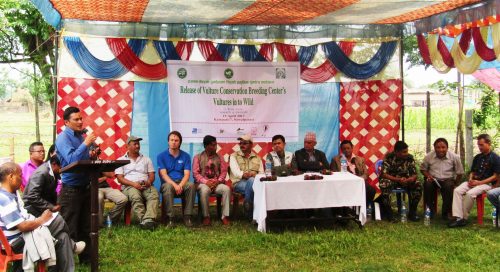 It is very likely that the released birds will at times cross into nearby Uttar Pradesh (UP), India, emphasising the trans-boundary nature of efforts needed to conserve vultures. There are already efforts underway led by the UP Forest Department and Bombay Natural History Society to reduce the threats, particularly of diclofenac, in the wider environment. Such international cooperation will be essential to the ultimate success of the re-establishing vulture populations. See the full report of the first ever release of captive-reared Critically Endangered white-rumped vultures here.

This video shows the lead up to and release of these six captive-reared white-rumped vultures. Thanks to Krishna Bhusal (Vulture Conservation Officer, BCN) for this amazing video of the day.