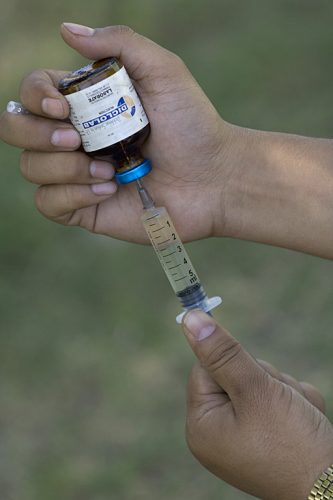 Large 30ml diclofenac vials like this are too convenient for veterinary doses, unlike the smaller 3ml ampoules needed for humans. Photo: Chris Gommersall/RSPB

Madras High Court has upheld the ban of multi-dose vials of human diclofenac, to protect against the illegal use by veterinary practitioners. The ban was imposed by the Indian Government in July 2015, and was heralded by SAVE and vulture conservationists a crucially important step to further reduce diclofenac use in cattle – the major cause of the catastrophic vulture declines across South Asia.

The case was brought to court by two Indian pharmaceutical companies, Laborate Pharmaceuticals of Haryana and Alpa Laboratories of Madhya Pradesh. They were hoping to overturn the restriction of injectable diclofenac vial size to less than 3ml. which had been imposed after several years of lobbying by conservation organisations including the Bombay Natural History Society.

Bharathidasan S. of SAVE Associate, Tamil Nadu NGO, ‘Arulagam’ said “The court battle has taken over two years, and I have done my best to attend most of the hearings, submitting relevant scientific documents”, he continued “We have been fortunate to have conservation-minded lawyers (Mr. Thilageswaran and Mr. Radhakrishnan) helping us, and the Deputy Drug Controller from Central Drugs Standard Control Organisation, Tamil Nadu State, has been very much on the side of science and the vultures”

It was concluded by the Honourable Judge in his statement, “We are accepting the precautionary principle advanced as an argument by the learned solicitor, and lack of decline in vulture population post 2012 argument of the writ petitioners pales into insignificance”.

The case prompted a High Court appointed panel of experts to meet, re-examining the evidence. Dr Vibhu Prakash, Deputy Director of the Bombay Natural History Society who was called by the expert panel along with senior Government officials said “We presented the strong scientific evidence for the link between diclofenac use in cattle and vulture declines, and evidence of how diclofenac is clearly still being used illegally by some irresponsible veterinary practitioners. Upholding this ban is an important way to make this illegal use less easy, and so help to protect the last few remaining vultures.”

There is no legitimate need for larger vials in human medicine, so the production of the larger vials has been a cynical way that the pharmaceutical companies have been facilitating illegal use of the drug.SAVE warmly welcomes this ruling which is an important step for vulture conservation in the region.

Indian press coverage with some further details in The Hindu: http://www.thehindu.com/todays-paper/tp-national/tp-tamilnadu/hc-turns-down-plea-of-pharma-firms-in-diclofenac-case/article19915259.ece

More coverage by BirdLife International can be found here: https://goo.gl/nwRtJ1