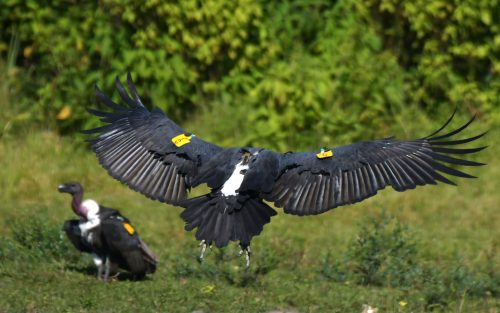 On the 9th of November 2017, the Government of Nepal and national and international conservation organisations released critically endangered white-rumped vultures Gyps bengalensis, in the first event of its kind in South Asia.

The Secretary of the Ministry of Forests and Soil Conservation, the Director General of Department of National Parks and Wildlife Conservation and a small group of officials, scientists and community leaders watched quietly as five of six vultures exited a pre-release aviary at the Jatayu Restaurant in Pithauli, Nawalparasi.

“This is the first release of captive-reared vultures in Nepal and the world is watching,” said Yubak Dhoj G. C., Secretary, Ministry of Forest and Soil Conservation, Government of Nepal. “I appreciate participation of community and multi-stakeholder efforts to bring about this important day.”

The Bird Conservation Nepal (BCN) team, who lead the conservation of vultures in Nepal, placed food on either side of the release-aviary door. The door was then opened from a distant hide. Wild vultures soon discovered the food outside and landed to feed. The captive vultures, were a little hesitant at first, but soon came down to feed as well. Half an hour later the first captive vulture exited the aviary to feed together with the wild birds. After one and half hours, five of the six vultures were outside the aviary (and the last one left the following morning). Meanwhile, some of the released vultures re-entered and exited the aviary a number of times before deciding to stay outside! Some wild vultures entered and exited the release-aviary where these birds have been kept to acclimatise since April (see link to film and news).

One vulture decided not to exit immediately, but no attempt was made to push her out and she left the following morning. This was a soft release, which meant it was the vultures who decided whether to stay or go.

The released vultures quickly fed with wild vultures, holding their own in the typical vulture feeding scuffles. Eventually they attempted to fly, which they found difficult at first, partly because it was their first unrestricted flight and partly because their crops were full of meat! The BCN team watched until all had found a suitable perch to roost for the night. Monitoring of the vultures continues, using satellite telemetry to locate them in the field, and further updates will appear on how they get on. 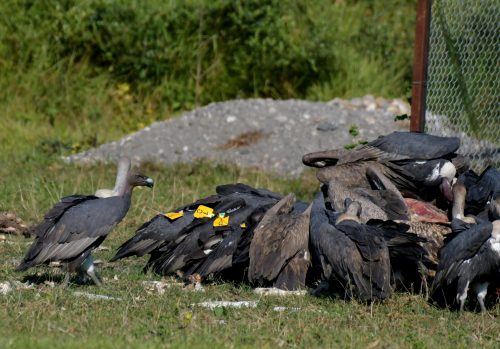 The vultures had been raised in captivity in Nepal’s Vulture Conservation and Breeding Centre in Chitwan National Park and released within the country’s provisional Vulture Safe Zone, which also extends transboundary into Uttar Pradesh, India where further efforts are underway, led by Bombay Natural History Society, and the UP Forest Department.

“Releasing vultures, reared in captivity, in this location, combines our in situ and ex situ efforts to save these birds,” said Krishna Bhusal, Vulture Conservation Program Officer, Bird Conservation Nepal. “It is an exciting day for me and all Nepal”.

Nepal is home to nine species of vultures. Five of these species, including the white-rumped vulture, underwent catastrophic population declines of greater than 90% in the mid-1990s to early-2010s. The birds are now considered critically endangered.

The loss of vultures has caused a loss in the vital ecosystem service that they provide. Vultures clean the environment of animal carcasses. Nepal’s people relied on this service to dispose of cattle carcasses. Ironically, vultures were killed in their thousands while providing this service because they are highly intolerant to a veterinary drug once commonly used in cattle. That drug is called diclofenac.

In the first major step to conserve vultures, the Government of Nepal banned the production and use of veterinary diclofenac in 2006. The Government of Nepal has also prepared and implemented a Vulture Conservation Action Plan for Nepal (VCAP; 2015-19). An output of this plan is to release vultures from the Vulture Conservation and Breeding Centre into the provisional Vulture Safe Zone.

“Within the provisional Vulture Safe Zone, we conduct undercover surveys of pharmacies and have found no diclofenac in the last four years,” said Krishna Bhusal. “We also conduct surveys of vulture populations and have found that the population declines have slowed and possibly even reversed.”

The breeding centre was established in 2008. It is a collaborative project of the Department of National Park and Wildlife Conservation (Chitwan National Park), the National Trust for Nature Conservation and Bird Conservation Nepal (BCN); with kind and continuous support from the Royal Society for the Protection of Birds (RSPB), the International Centre for Birds of Prey and the Zoological Society of London. Presently, there are 50 adult White-rumped Vultures and 8 fledglings in the breeding centre.

BCN, with the support of the RSPB have created the pVSZ in the western lowlands of Nepal. It is a large area (30,000 km2 from the districts of Nawalparasi to Kalali) where awareness raising activities among communities have ensured that diclofenac is not used as a veterinary drug. Nepal is set to have the world’s first Vulture Safe Zone if these birds demonstrate it is truly safe.

“It is time to assess whether the provisional Vulture Safe Zone has become a true Vulture Safe Zone, but only the vultures can show us that,” said Toby Galligan, Senior Conservation Scientist, RSPB Centre for Conservation Science (RSPB CfCS). “So, we are using satellite telemetry to track wild white-rumped vultures remotely and in the field. If any die we can recover them, examine them for cause of death and prevent other vultures dying from that cause.”

In April and November this year, BCN and the RSPB CfCS fitted satellite transmitters to 11 adult white-rumped vultures. All vultures are alive, breeding at several sites within the provisional Vulture Safe Zone and foraging up to 100km from where they were caught.

“Our vultures frequently fly into India to forage,” said Krishna Bhusal. “That is why trans-boundary conservation of vultures is essential. The DNPWC, NTNC and BCN are part of SAVE (Saving Asia’s Vultures from Extinction), which has united organisations in the region that want to conserve vultures and has produced a region-wide strategy to do this. Another important group is the Regional Steering Committee for Vulture Conservation, which brings together the Governments of Nepal, India, Pakistan and Bangladesh to implement major actions that will save our vultures”.

This news comes immediately after 126 Parties of CMS adopted the Vulture MsAP in Manila, and added 4 Asian Vultures to CMS Appendix I, giving them the highest level of protection [link]. We hope that the momentum is building for governments to engage more directly with support for the priority actions needed in their countries, and these Nepal releases and those planned for 2018 in India form a key part of this.

Related to but prior to the release in the same area, wild birds were tagged. See blog on Juliet Vickery’s perspective on this exciting part of the work.

More news re: captive vultures being released in South Africa can be found here