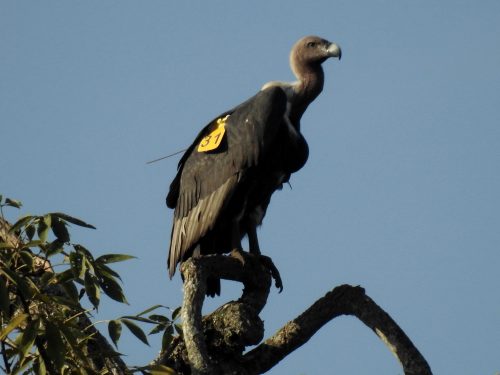 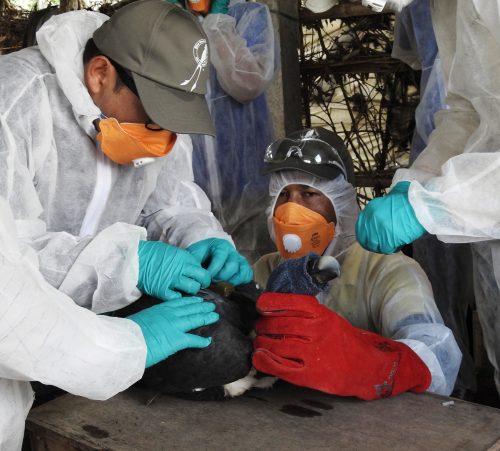 The objective of the project is twofold: evaluate Nepal’s vulture conservation breeding and release programme; and evaluate the safety of Nepal’s Vulture Safe Zone (VSZ). The breeding programme is set to have its second good year for producing fledgling white-rumped vultures; and the VSZ is set to be the first region that could be declared free from diclofenac and other vulture-toxic NSAIDs.

So far, the 17 vultures have clocked approximately 9 vulture-years between them – that is, the combined time each vulture has been providing data in years. The first map shows movements and where they have been during this time* 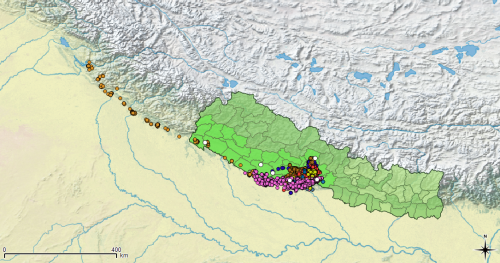 Each dot is a location where a vulture was recorded. Different coloured dots represent different vultures. The dots are clustered because the vultures tended to use the similar sites. Except for one vulture (light brown dots), which surprised us by travelled 900km west, along the edge of the Himalayan foothills, to beyond Shimla in Himachal Pradesh and back again. This wild vulture was actually sighted in Uttarakhand at carcass dumps by the vulture team there (a great case of international collaboration in December, with BCN sending the coordinates and these being checked on the ground), and this shows what free-ranging vultures can do and why conservation actions need to happen across borders and vast areas. But this vulture’s behaviour is unusual compared to the other vultures that were tagged.

The second map zooms in on the cluster of dots. 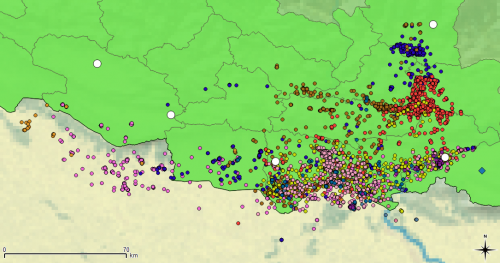 Closer inspection of the cluster reveals different vultures behaving differently. For example, dark blue, red and dark brown spend considerable time in the hills; light purple has roamed west and spent considerable time in northern India; and light blue and yellow prefer to travel no further than the Lumbini vulture safe feeding site (South Nepal). The white dots show the location of five of Nepal’s six Vulture Safe Feeding Sites; and the blue diamond (extreme right) shows the location of Nepal’s Vulture Conservation Breeding Centre. Wild and captive vulture were all tagged and released at the Nawalparasi vulture safe feeding site ie release site (the white dot furthest to the right). Perhaps oddly, the vultures did not venture very far to the east of the site so far.

One key finding from this work (although perhaps not so surprising) is the number of locations of birds across the border in Uttar Pradesh (UP), India, and this has prompted some excellent transboundary linkages, with locations being visited by the BNHS/UP Forest Department teams, and discovering new feeding sites and potential breeding sites that were not previously known from the UP VSZ! Within Nepal, the ground truthing team discovered some new breeding colonies and important foraging sites while following these tagged vultures.

The third map zooms in on the Nawalparasi feeding site. 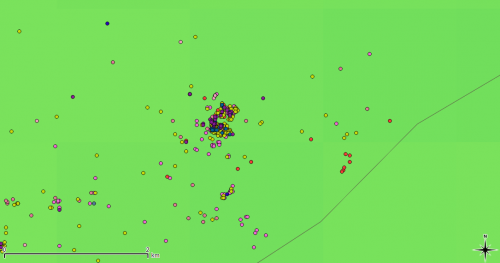 The fourth map is the same as the third, but the released vultures are shown instead of the wild vultures. 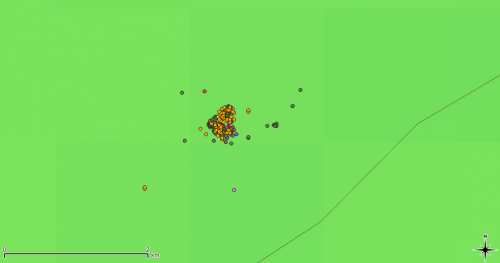 This is in fact the total extent of the roaming of the 6 released vultures since November 2017. None have so far moved more than 2km. With food being regularly supplied at the feeding site, these vultures do not have any major impetus to range further away. At least, this allows us to closely monitor these vultures and we assume they will soon travel further. Wild vultures are presently feeding chicks and relying on the regular food supply at this feedings site, but once the breeding season has ended we are considering temporarily stopping feedings to encourage the released vultures to explore more of the provisional Vulture Safe Zone.

The big vulture telemetry project is the collaborative effort of the Department of National Parks and Wildlife Conservation, Chitwan National Park, Bird Conservation Nepal, the Royal Society for the Protection of Birds, the International Centre of Birds of Prey, National Trust for Nature Conservation and the Zoological Society of London. 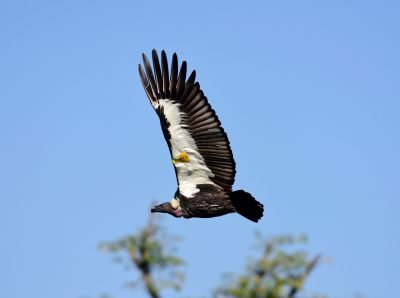