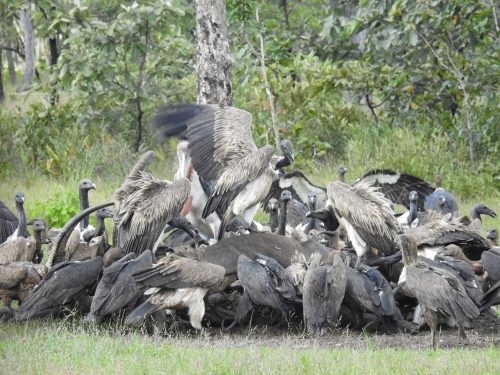 The Ministry of Agriculture, Forestry and Fisheries of Cambodia has banned the veterinary sale and use of diclofenac in the Kingdom with immediate effect. The Government has taken this measure to safeguard the remaining Cambodian vulture population, which is declining and threatened with extinction. “Diclofenac, whilst harmless to cattle and other livestock, results in death of vultures if they feed on a carcass of an animal previously treated with this drug” said Dr Julia Stenkat, of the Cambodia Vulture Working Group partner – Angkor Centre for Conservation of Biodiversity (ACCB).

All vulture species occurring in the Kingdom are protected under Cambodian law and this precautionary measure by the Government of Cambodia will reduce the risk of accidental diclofenac poisoning, although the risk of poisoning from other agricultural chemicals like carbofuran (poison-baits, often as retaliatory poisoning of dogs or other mammals) remains an ever-present danger to Cambodia’s declining vultures.

The vulture population of India, formerly the largest in the world and numbering in the millions, suffered a 99% decline as a consequence of the veterinary use of diclofenac administered to cattle. The near disappearance of these keystone scavengers from the ecosystem, resulted in major public health implications as millions of cattle carcasses dumped daily in refuse dumps went uneaten. The feral dog population grew and this led to increased risks of human deaths from rabies. As a result, the Governments of India, Pakistan, Nepal, Bangladesh and Iran have earlier banned the veterinary use of diclofenac, promoted meloxicam, a harmless and equally effective substitute drug and there is now evidence of vulture population recovery in some regions including Nepal (see here).

The Cambodia Vulture Working Group (CVWG), a Core Partner of SAVE, is a consortium of Government focal points and NGOs which has been championing the conservation of Cambodia’s vultures since 2004. Cambodia’s vultures are facing an increasingly high risk of extinction and continuous monitoring has shown a 50% decline over the past ten years. Poisoning (poison baits), food shortage, habitat conversion (economic land concession) and destruction of nesting trees are thought to be the main reasons for their decline and these are the priorities addressed in the Cambodia sections of the SAVE’s annually updated ‘Blueprint or the Recovery of Asia’s Globally Threatened Vultures’. Note that the Blueprint is the main regional basis for the Convention of Migratory Species (CMS) Vultures Multi-species Action Plan which can be downloaded here. The 2019 national census recorded only 120 vultures remaining in Cambodia.

In 2018 diclofenac was found on sale for the first time in Cambodia by the CVWG who advocated a ban to the Ministry of Agriculture, Forestry and Fisheries (MAFF). One year later on 15 July 2019 MAFF has issued a ban on the importation, sale and distribution (including a recall) of diclofenac for veterinary purposes, to pre-empt a similar catastrophe as suffered in India.

“H.E. the Minister of Agriculture Forestry and Fisheries recognizes the potential impact of a diclofenac ban on the Kingdom’s vultures and the consequences this could have for human health. MAFF is pleased to have worked with the CVWG to issue this ban” said Dr. Nou Vonika, Director of Department of Animal Health and Veterinary Public Health, General Directorate of Animal Health and Production.

“We applaud MAFF’s decision. It is one of the critical steps aiming to save and prevent the extinction of Cambodia’s vultures impacted by diclofenac used for veterinary purpose. This decision needs to be circulated, enforced and monitored.” said Teak Seng, Country Director of WWF Cambodia.

“The challenge now is to ensure the relevant provincial authorities are aware of the ban and have CVWG support to help enforce it” said NY Naiky, BirdLife International and CVWG coordinator who continued, “This pre-emptive measure by MAFF is most welcomed but poisoning of vultures with other agricultural chemical, including carbofuran, a deadly carbamate pesticide is a major challenge.” 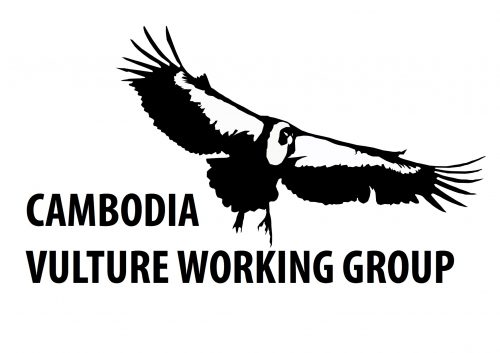 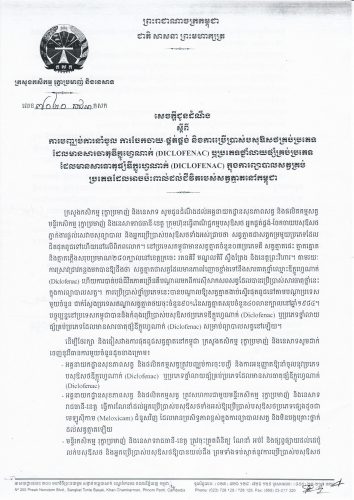 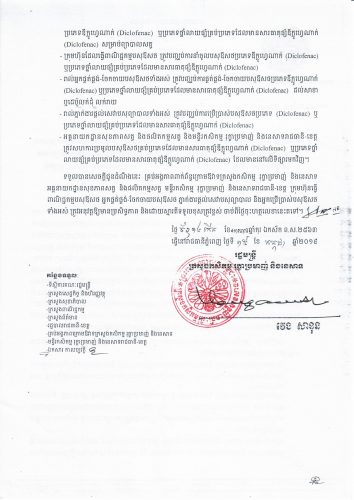