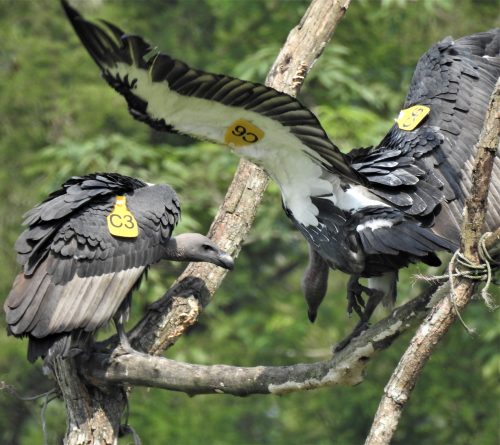 Having released the first captive-bred vultures in the world in 2018, on October 19th 2019 the Government of Nepal, Bird Conservation Nepal (BCN) and other national and international conservation organisations released a further 13 White-rumped Vultures Gyps bengalensis into the wild – six were captive-bred juveniles, and seven were slightly older captive-reared birds. 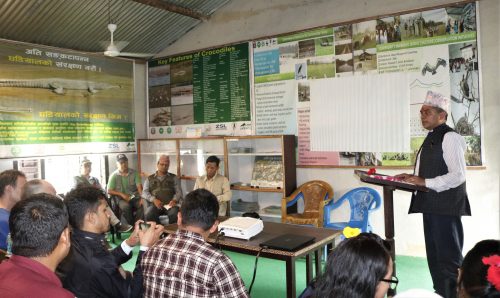 After walking to the release site, a packed hide watched as chief guest Gopal Prakash Bhattarai, Director General of DNPWC, pulled the rope that opened the release aviary. Outside, a buffalo carcass had already attracted many wild vultures, including several previously released birds. Within three minutes, the first captive bird flew through the open gate to join the throng of birds frenziedly feeding at the carcass. Others were more nervous, walking to the threshold of the aviary, before turning back to the apparent safety of their home for the past year. However, within an hour, all but three of the birds had left the confines of the aviary, and had all flown to the freedom and safety of the trees surrounding the release area. 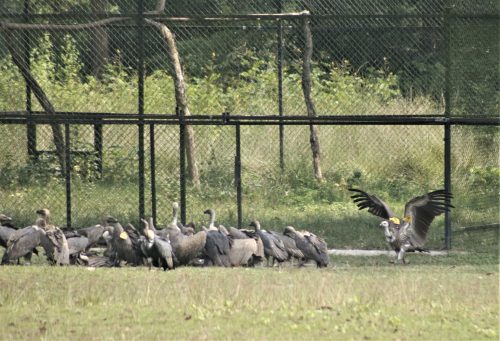 First images of the birds in the wild  –  Photo BCN

As with previous releases, the birds have been fitted with GPS telemetry tags, to follow their movements and monitor their survival. Nepal was the first country to eliminate the sale of veterinary diclofenac, the vulture-toxic veterinary drug responsible for pushing White-rumped and other Gyps vultures to near-extinction. By monitoring the GPS-tagged birds, both released and wild, and investigating the cause of mortality of any vultures that die, we can ensure that diclofenac and other non-steroidal anti-inflammatory drugs (NSAIDs) are no longer posing a threat to these Critically Endangered birds. Its promising that monitoring of the birds previously released and tagged, after more than a year since declaring the world’s first Vulture Safe Zone (VSZ), we have had no evidence that any of these birds have succumbed to NSAID-poisoning. Hopefully, the fate of the newly-released birds, and those wild birds also caught and tagged this week, will be similarly successful, and the VSZ can be considered truly safe for vultures.

See earlier updates on previous releases, and we will keep you updated periodically on how the birds fare.