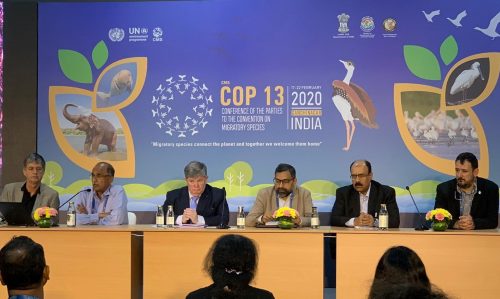 The 13th global CoP of CMS was hosted by India this week and strongly featured vultures. Prime Minister Narendra Modi even mentioned vultures in his inauguration speech. There were three vulture side events and other presentations featuring poisoning and vulture themes. 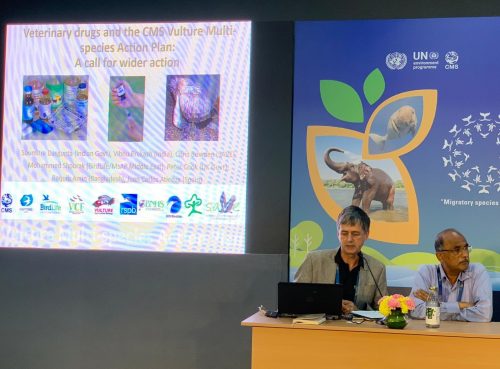 One side-event entitled: “Veterinary drugs and the CMS Vulture Multi-species Action Plan: A call for action” underpinned the revised wording for the plenary sessions where the following wording was agreed:

“Urges CMS Parties and invites Parties, Signatories and non-Parties of CMS Family instruments that are Range States of vultures and scavenging Aquila eagles, to:
a) conduct safety testing of existing veterinary NSAID molecules and withdraw licensing of vulture-toxic NSAIDs (including diclofenac) for veterinary use or implement adequate risk assessment with particular reference to known threats to vultures and Aquila eagles;
b) ensure safety testing of new veterinary NSAIDs on these groups of birds as part of protocol before they are licensed; and,
c) contribute to identification and promotion of safe alternative drugs; “ 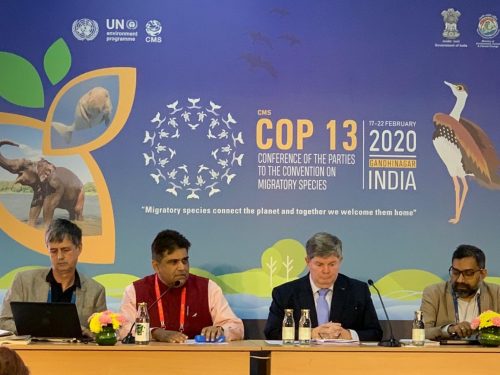 Vibhu Prakash (BNHS India) outlined the history of declines and the key role of NSAIDs. 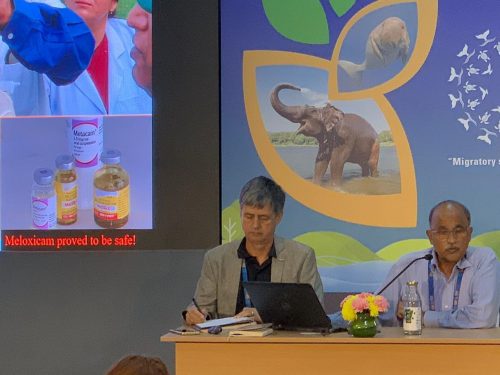 Raquibul Amin (IUCN Bangladesh) then described how the Bangladesh Government has officially gazetted Vulture Safe Zones and has started implementing regional (soon to be made national) bans of ketoprofen and aceclofenac. Mohamed Shobrak of Saudi Arabia and MsAP Middle East coordinator highlighted efforts of several countries including Saudi Arabia and Oman where steps are underway to ban diclofenac, and Chris Bowden (SAVE and RSPB) who chaired the session commended the recent steps by Cambodia and Iran to ban veterinary diclofenac. 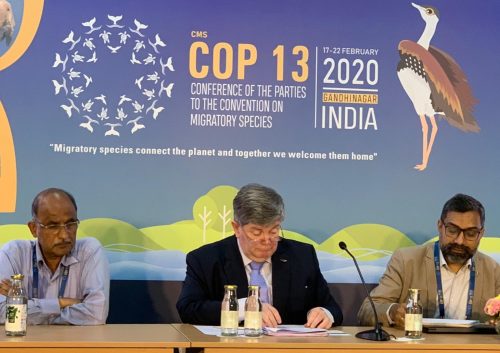 Peter Cook, Deputy UK High Commissioner, added that he was pleased that the UK Government had been able to support early initiatives to address the NSAIDs threat, and highlighted the importance of SAVE in effectively engaging such a broad set of partners, and how pleasing that the Indian Government is supporting more strongly to follow this through.

Finally, from Spain Juan Carlos Atienza (SEO/BirdLife) reinforced how irresponsible it is that several European Governments had licenced veterinary diclofenac more recently, and especially for Spain where the main European vulture populations are, this must urgently be reversed. 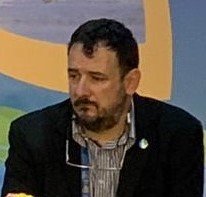 The other side events presented the newly released Implementation Plan for the Multispecies Action Plan, and highlighted the overarching threat of poison baits. This was chaired by Jose Tavares. The new Implementation plan can be downloaded here, and was compiled by Dave Pritchard for CMS Raptors MoU

Finally, the Indian Government hosted one further vultures side event, with key contributions by Dr S P Yadav (Central Zoo Authority MS), Dr Vibhu Prakash (BNHS), Sri Arvind Kukrety (Deputy Drug Controller, India) & Chris Bowden (SAVE/RSPB). This further reinforced the key messages and commitment of the Indian Government to implement the priority actions, and indeed the resolution (above) and indeed the announcement that an updated national Vulture Recovery Plan will be released in the coming months.