The tagged birds, an adult and an immature, were noted continuously returning to the same forested ridge in Laos not far from the border of Siem Pang Wildlife Sanctuary. Fieldworkers were able to visit the area recently and reported two nests and three near fledged juveniles. Adults returned to feed young during the visit. Given that the visit was short and combined with the inaccessible nature of the terrain it seems likely other nests were present but undetected. 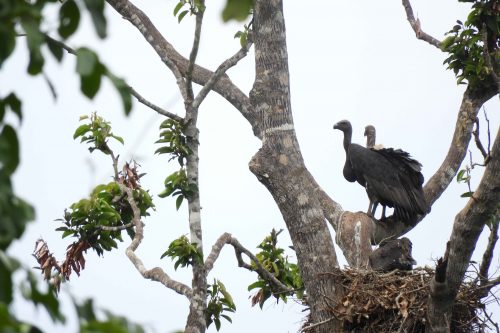 BirdLife Cambodia Programme and Rising Phoenix work together to support the conservation of Siem Pang Wildlife Sanctuary which supports populations of five Critically Endangered bird species including three Asian vultures. The site is now the last stronghold for these species in the region where up to ten slender-billed vulture and three red-headed vulture nests are monitored annually by a field monitoring team, lead by Eang Samnang. Three vulture stations are held monthly which attract over 90% of Cambodia’s remaining vultures. Securing this newly found colony from disturbance is now a priority. The GSM tags were provided by Rising Phoenix and the operation coordinated by James Lyon. Andre Botha of Endangered Wildlife Trust & Vulture Specialist Group supervised the vulture capture and fitted the GSM trackers. Andre was visiting Cambodia to run a poison-response workshops for Wildlife Conservation Society and the BirdLife Cambodia Programme, which will be reported separately.