The pharmacy surveys paper has further serious implications and this news piece features John Mallord’s second blog explaining why this is important both in Asia and worldwide:

A recently-published paper detailing the results of undercover pharmacy surveys highlighted the ongoing risk to South Asia’s vultures of the continued availability of diclofenac (see our previous news item). Yet equally significant was the wide availability of other vulture-toxic NSAIDs. Furthermore, evidence shows that this problem is not confined to Asia, but is now also a threat to Europe’s vulture populations. 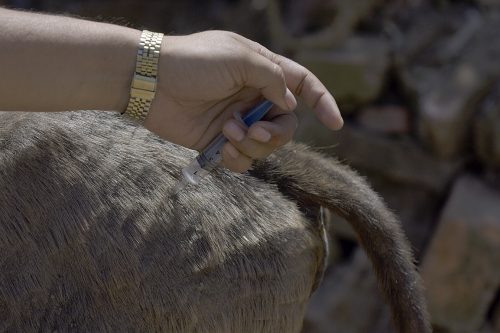 A cow being injected with an NSAID by a vet. c. Chris Gomersal/RSPB

The threat of other NSAIDs

A total of eleven NSAIDs were found in our surveys across India, Bangladesh and Nepal, several of which are known to be toxic to vultures. Perhaps the biggest new threat is nimesulide, the prevalence of which increased in several regions across India and Nepal. Residues of nimesulide have been found in association with visceral gout, a characteristic symptom of NSAID poisoning, in a number of vultures across India. It has also been the subject of experimental safety testing where its toxicity has been confirmed (see last SAVE report).

Ketoprofen is another drug that has been shown in safety tests on captive birds to be toxic to vultures. Lethal concentrations have been found in cattle carcasses in India, so the threat is widely known. Yet, so far, only the Government of Bangladesh has taken the lead, instigating a regional ban, but only so far within the country’s two Vulture Safe Zones, and even here it remains the most commonly-available NSAID for treating cattle as implementation of the ban begins to take effect. Tamil Nadu state in South India has also taken some initial steps on this.

Other drugs such as aceclofenac and flunixin potentially pose an even greater threat if they continue to gain popularity. Aceclofenac is a particular worry, as it is immediately converted to diclofenac by the cow’s metabolism. This means that aceclofenac will have the same lethal effect on vultures, and will potentially have the same catastrophic impact on vulture populations. Currently this drug remains legally available throughout the range. 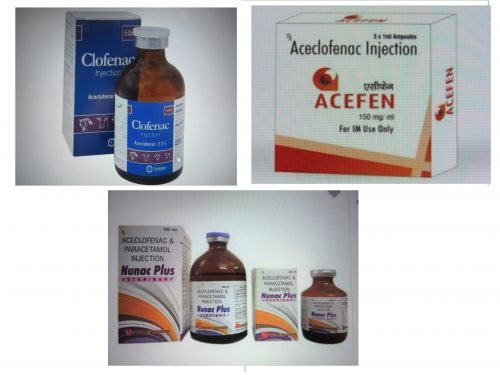 What needs to happen

Although clearly not 100% effective, the earlier bans of veterinary diclofenac have been successful, as witnessed by the partial recovery of vulture populations in South Asia. Bans now need to be implemented on other drugs when scientific evidence demonstrates their toxicity to vultures. Firstly, as envisaged, the Government of Bangladesh should extend its exemplary steps for banning ketoprofen to cover the whole country, and other countries need to follow their lead. The threat from nimesulide, which is increasingly used across the region, needs to be similarly stopped. We are aware that steps for banning aceclofenac have been initiated in India, and we eagerly await the outcome on this, hoping that India will take a lead on restricting this drug.

The death of vultures through NSAID poisoning is not just an Asian problem. A number of European governments have licensed diclofenac for veterinary use, including Spain, the core of European vulture populations. While there is, as yet, no direct evidence that any vultures have been killed by diclofenac in Spain, a recent study discovered residues of the drug in a pig carcass that had been provided to vultures at a supplementary feeding site. This demonstrates that livestock management in Europe does not preclude these NSAIDs reaching the vulture food-chain as has been argued by those against a ban by the European Commission.

However, flunixin has been directly implicated in vulture deaths in Europe: and the same study found elevated flunixin residues, along with severe visceral gout, in the carcasses of three Eurasian Griffon Vultures. This follows on from the first reported instance of NSAID poisoning in wild vultures outside of South Asia, in Spain a few years earlier.

NSAIDs are used elsewhere in the world to treat cattle, including Africa where vulture populations are already declining at an alarming rate, as highlighted in the Multi-species Action Plan adopted by the Convention of Migratory Species (CMS). The threat of NSAIDs to vultures is clearly a global issue that needs to be addressed by governments worldwide. It is, therefore, encouraging that the recent CMS adopted a resolution supporting the urgent need for safety-testing on vultures and other scavenging raptors of all new and existing veterinary NSAIDs before licensing them, and indeed that bans of vulture-toxic drugs are needed throughout vulture range-states of Asia, Africa and Europe (see Birdlife article here).