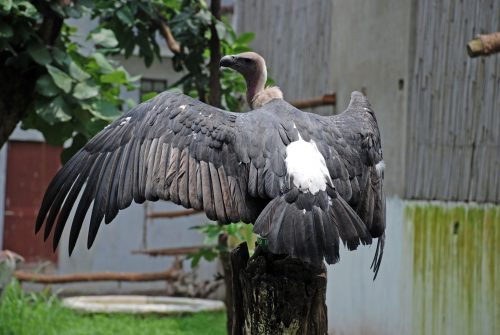 Last week, eight white-rumped vultures were released as a pilot trial by the Haryana State Forest Minister from close to the Pinjore Jatayu Breeding Centre in northern Haryana, India. The centre, which is managed by BNHS, with funds from Haryana Forest Department, central Government and the Royal Society for the Protection of Birds, has become the example for others, and the focus for vulture conservation in India. The release of these birds has been delayed due to Covid restrictions and would have had a higher level of attendance in different circumstances. However, this is a landmark event in the efforts to save these vital species from extinction.

An Important Trial
Since the dramatic vulture declines were first noted in India and across South Asia in the 1990s, and breeding populations of three Critically Endangered vulture species were established in centres, the time when releases can take place in India has been eagerly awaited.

White-rumped vultures have been released in Nepal since 2017 and these birds have been tracked and monitored closely (e.g. see here). Similarly, the newly released birds in India have been fitted with PTT and GPS tracking devices. This is important as it will allow an assessment of the safety of the environment, to confirm whether it is sufficiently clear of diclofenac.

This NSAID was of course the cause of the initial declines and remains the main threat to vulture populations in India. Ridding the environment of the drug is therefore an important prerequisite for releases to happen. Recent monitoring of the release zone around the centre has shown that the prevalence of diclofenac in both pharmacies and cattle carcasses has declined since the national ban was declared 14 years ago. However, there are also signs that there are still significant and alarming amounts of diclofenac in the environment. The release of these birds is therefore a very important trial and one that should be very carefully monitored.

Satellite-tagging the birds and remaining ready to immediately find and determine the fate of any bird  will be the next major challenge. There is a lot more to do to ensure their environment is safe. Continuing to monitor the prevalence of diclofenac by conducting pharmacy and cattle carcass sampling and by monitoring wild birds is essential. Additionally, other drugs also pose a threat. For example, one drug, aceclofenac, which is still in legal veterinary use, has been scientifically demonstrated to convert immediately to diclofenac in cattle, so poses the same threat to vultures. Although steps to ban this drug are underway, this has not yet resulted in action.

Until the results of this trial is known, there should be caution around planning further releases. But meanwhile this is acknowledged and celebrated as an important milestone. The birds will be closely monitored and any records of sick or freshly dead vultures within 100km of the release site will be really important to report.