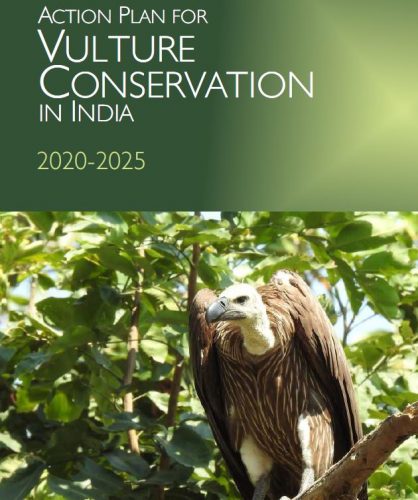 An important 118 page vulture conservation action plan has been released by the Government of India. With forewords by the Minister for the Environment, Forest, and Climate Change (MoEFCC), by the Minister of State MoEFCC, by Secretary MoEFCC, and by Director General MoEFCC, plus an extended Preface by Mr Soumitra Dasgupta (now DG). The document can be downloaded here and has many important advances, building on the 2006 Action plan.

The Chair of the IUCN Species Survival Commission, Jon Paul Rodríguez congratulated the Indian Government, and acknowledged “the leading role of India in taking steps to avoid the extinction of four Critically Endangered vulture species” and “warmly welcomed the action plan as a serious commitment to following sound scientific evidence. The captive breeding programme in India has been exemplary, but the challenge is now to make the environment of free-ranging vultures safe enough that captive birds can be released into the wild. Effective action to achieve this goal will underpin the conservation of these iconic and keystone species”

Additionally Director General of MoEFCC, Mr Soumitra Dasgupta, who has driven the process and production of this plan commented “Vultures are such an important part of India’s heritage. This plan builds on the earlier 2006 plan, but in far more detail including costings. It incorporates important scientific updates and addresses the need for wider actions such as Vulture Safe Zones throughout the country, as well as monitoring of both the major threats and the vulture populations”. He added that the plan also outlines the need for more vulture conservation breeding centres and vulture rescue centres in India and incorporates actions for the recovery of the other vulture species as well as Gyps vultures.

Bombay Natural History Society Honorary Secretary, Debi Goenka, also welcomed the plan: “This represents important engagement from the government, and can spread the load for vultures being held in separate centres. The commitment for vulture safety-testing is also important, and especially the recognition that wider engagement of other parts of government is needed to ensure that unsafe drugs are quickly removed from veterinary use”.

Professor Rhys Green, the Chair of SAVE, commented “This important plan covers an impressive range of actions, from testing the safety to vultures of veterinary drugs, linked with the regulation of their use, to conservation breeding to maintain a safe captive population. The plan includes the appointment of a national committee with representation of the different government departments whose work affects vulture conservation. SAVE welcomes this Plan and offers the national committee any technical assistance it might want.”