The Cabinet of the Bangladesh Government, chaired by the Prime Minister, has taken a landmark decision, approving a national ban of production, sale and use of ketoprofen to safeguard the small remaining vulture populations in the country.

Honorable Prime Minister of Bangladesh in the Cabinet meeting that approved the proposal for banning of ketoprofen across the country (photo: internet) 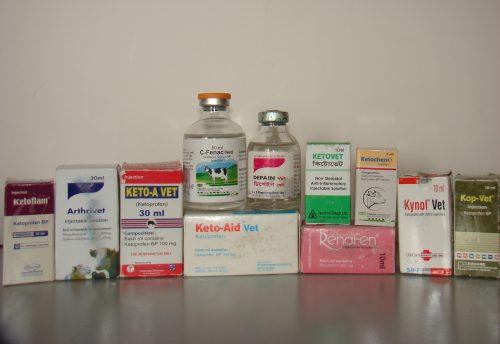 Bangladesh is the first country worldwide to ban any of the drugs now known to be toxic to vultures since the previous veterinary diclofenac bans more than ten years ago. Ketoprofen has become the main anti-inflammatory drug used by vets in the country, so this represents a significant change, and the companies concerned are already stepping up production and improving their formulations of the safe alternative drug, meloxicam.

Non-Steroidal Anti-Inflammatory Drugs (NSAIDs) including diclofenac and ketoprofen are the primary threats to the vultures of South Asia, including Bangladesh. These drugs were responsible for the catastrophic 99.9% declines of white-rumped vultures in the region. When these NSAIDs are administered to cattle, and if the cow or buffalo dies within a few days and is consumed by vultures, it causes gout, kidney failure and death in the following days .

Ketoprofen was first demonstrated to be toxic to vultures in trials carried out in South Africa over ten years ago. The first localised bans came in Bangladesh’s two gazetted Vulture Safe Zones (VSZs) in 2017, covering around one-third of the country. However, making this ban fully effective has been a challenge. Despite the bans and major awareness campaigns, the 2018 undercover pharmacy surveys conducted showed that 62% of veterinary drug suppliers still offer ketoprofen, and that’s only a 10% reduction from earlier. It has been difficult to control the drug supply into these areas while it remained legally available elsewhere in the country. Hence the countrywide banning of ketoprofen is such an important step.

The process leading up to this decision was spearheaded by the Bangladesh National Vulture Recovery Committee (BNVRC) under the Ministry of Environment, Forest and Climate Change (MoEFCC) and the Bangladesh Forest Department. Two pharmaceutical companies, Renata and ACME have also engaged very positively in the process, and others are also being approached. IUCN Bangladesh has played a key role in providing technical support in the banning process, and mobilising international experts through the SAVE network. Other stakeholders have also played crucial roles and will be key to achieving swift and full implementation – most notably the Department of Livestock, Drug Administration, Ministry of Health, Bangladesh Bird Club, as well as leading national conservationists.

BNVRC held a virtual meeting with major drug companies and other relevant stakeholders, which was Chaired by the Secretary of MoEFCC

A major step in the lead up to this decision was a multi-stakeholder meeting organised by the BNVRC in November 2020 with all key stakeholders including major veterinary drug producing pharma-companies. There was unanimous agreement that ketoprofen should be banned throughout the country and the safer alternative, meloxicam, should be promoted. This paved the way for this submission of the proposal to the country’s Cabinet.

The decision is an important action in line with the Resolution covering the use and regulation of veterinary NSAIDs taken at last year’s Conference of Parties to the Convention on Migratory Species, held in Gujarat, India.  It shows Bangladesh’s leadership and commitment to removing vulture-toxic drugs from veterinary use. The decision also contributes strongly to the objectives of the CMS Vulture Multi-species Action Plan.

Dr. Md. Billal Hossain, former Chair of the BNVRC said: “There is still some work left to completely ban and remove ketoprofen from the country. The Forest Department and IUCN did a lot to bring us to this position, and I am happy that this integrated effort between the Forest Department, IUCN, different ministries and departments, BNVRC members and finally the medicine manufacturing industries, means our mission is going to be successful.”

Mr. Raquibul Amin, Country Representative of IUCN Bangladesh stated: “The decision to ban ketoprofen across the country will be a big step in stopping the extinction of vultures in Bangladesh.” He added, “Steps must be taken immediately to ban other similar toxic NSAIDs, that may enter the market after ketoprofen is banned.”

Mr Chris Bowden, SAVE Programme Manager from RSPB, UK said: “Bangladesh is showing important leadership by banning ketoprofen across the country. This will go down as a major milestone in Asian vulture conservation.”

Professor. Rhys Green of Cambridge University, and Chair of SAVE stated, “’The governments of India, Pakistan, Nepal and Bangladesh were commendably quick to ban veterinary use of the vulture-toxic drug diclofenac over ten years ago. Unfortunately though, they have been slow to ban any other drugs, despite evidence of their toxicity to vultures. Even aceclofenac, a pro-drug of diclofenac which is quickly converted to vulture-toxic diclofenac by the cow’s metabolism, has not been banned yet.” He added: “Ketoprofen was shown to be toxic to vultures in 2009. Bangladesh has led the way, first by banning veterinary use of the drug in its two Vulture Safe Zones some years ago, and now by banning it throughout the country.”

Thanks to A B M Sarowar Alam and Sakib Ahmed, IUCN Bangladesh for contributing material for this post