First evidence of a vulture killed by veterinary diclofenac in Spain – will the Spanish government and the EU act after this smoking gun event? 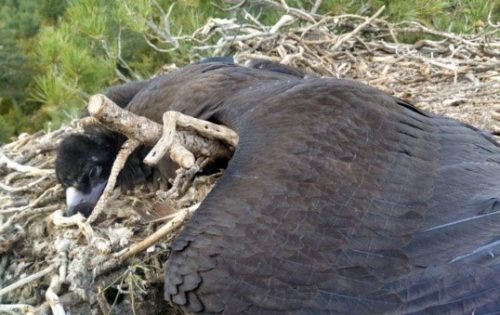 A new paper documents the death of a fledgling Cinereous Vulture found in a nest in Catalonia, Spain, last September. Chemical analysis of its tissues and post-mortem findings showed that it died from exposure to veterinary diclofenac, a non-steroidal anti-inflammatory drug (NSAID) that is highly toxic to vultures.

Despite the strong and unchallenged evidence that the well-documented catastrophic vulture declines across South Asia were caused by veterinary use of the NSAID diclofenac, the drug was still approved for veterinary use in Spain in 2013. Approval was given despite strong warnings that there could be impacts on European vulture populations (see Green et al 2016). It was argued by regulatory authorities in the EU and Spain (and some other European countries) that diclofenac would not enter the vulture food supply because of tight restrictions on the provisioning of vulture feeding sites with carcasses of animals that had received veterinary drugs before they died. However, even at the time approval for diclofenac was given, this argument was already known to be false. A paper (see Zorrilla et al 2015) had already shown that a Eurasian griffon vulture had died in Spain with clear signs of poisoning with the NSAID flunixin, which is toxic to vultures in a similar way to diclofenac. The regulations that it was claimed would protect vultures from exposure to diclofenac should also have prevented exposure to flunixin, but clearly, they did not.

A study (Herrero-Villar et al 2020) monitoring animal carcasses available to vultures in Spain showed that they contained residues of three veterinary NSAIDs, including diclofenac and flunixin, both of which are known to be toxic to vultures. In addition, this study reported three Eurasian griffon vultures poisoned by flunixin. The evidence that regulations intended to control the method of disposal of carcasses do not protect vultures from exposure to toxic drugs is now overwhelming. This latest news further confirms the very real threat that diclofenac poses if it remains in veterinary use.

SAVE Chairman and Cambridge University Professor Rhys Green said. “The threat posed by diclofenac and other toxic NSAIDs was obvious before, but this latest published evidence should convince regulators that veterinary protocols and directives are inadequate. The only way to prevent harm to legally protected populations of wild vultures is to rescind licenses in Europe for the production of veterinary diclofenac. Where necessary, other veterinary drugs known to be safe for vultures, such as meloxicam, should be used instead.”

Post-mortem examination of this Cinereous Vulture revealed the bird died because of severe generalised visceral and articular gout caused by diclofenac intoxication. This case is the first confirmed case of diclofenac poisoning in Spain (and in Europe), and is also the first report of diclofenac poisoning in Cinereous Vultures. It represents a watershed moment that proves that veterinary diclofenac not only enters the food supply of vultures in Spain, but also kills them. Diclofenac should be banned from veterinary use in Europe and the licenses of other vulture-toxic NSAIDs require urgent review.

Chris Bowden, Co-chair of the IUCN Vulture Specialist Group said “It seemed unbelievable that Spain, Italy and the EU would allow the licensing of veterinary diclofenac in 2013 after what had happened in Asia, and hopefully this latest evidence has come to light in time to prompt immediate action to cease veterinary use of the drug and avoid much wider impacts.

This will also be in line with the recent Convention of Migratory Species resolution which among key steps needed for toxic NSAIDs, called for an international effort to remove diclofenac from veterinary practice”