At least 69 vultures died in farmland of the terai in Nepal this week. Apparently local villagers illegally used poison to kill stray dogs, and these dog carcasses were then eaten by the vultures, killing them. News of the event, which was 50km west from the main vulture release site in Nawalparasi District, prompted a quick response with officials from the Municipality, police, division forest, livestock and veterinary office, NTNC and Bird Conservation Nepal (BCN) reaching the scene within hours of the alarm being raised. Photographs and tissue samples were taken from the birds to firmly establish the cause, before the vulture and dog carcasses were buried. A crime scene report has been filed, and SAVE Partner, Government Department of National Parks and Wildlife Conservation (DNPWC) and Department of Forest and Soil Conservation, Ministry of Forest and Environment officials have launched a further investigation and will be following up with punishment as appropriate. Samples will be tested at the National Forensic Science Laboratory in Kathmandu.

In total, the death toll included 35 white-rumped vultures, 1 slender-billed (both Critically Endangered species) plus 31 Himalayan Griffon and 2 cinereous vultures (classified as Near threatened), with one Himalayan Griffon still alive and now being treated. No released birds were involved. 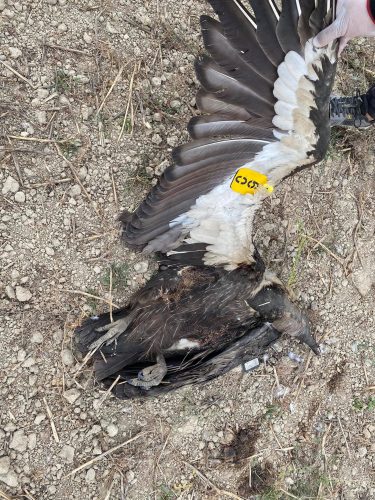 One of the white-rumped vultures was a wild adult which has been satellite tagged and tracked. – Photo BCN/ Deu Bahadur Rana

Although it was diclofenac that has so dramatically reduced vulture numbers since the 1990s, Nepal has made excellent progress in removing diclofenac from veterinary use, especially through Vulture Safe Zone and other community-based work, as well as clear action of Government in declaring diclofenac illegal for veterinary purposes since 2006. This poison baits threat could undermine all the efforts if it is repeated. 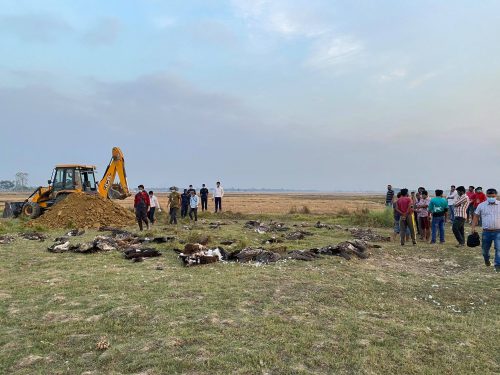 The authorities have reacted quickly. After taking tissue samples the vultures and dogs were buried. Photo BCN/ Deu Bahadur Rana

BCN CEO Ishana Thapa said “We have been working to save vultures in Nepal for almost 20 years now, and the progress in breeding the birds, and reaching the stage of releases over the past three years, along with the wild vulture population trends showing significant population increases in recent years, has encouraged us that we, together with all involved in the vulture team are on the right track”, continuing: “But events like this are a big worry, and we need to do more to ensure this kind of event isn’t repeated”.

SAVE Programme Manager and Co-chair of the IUCN Vulture Specialist Group Chris Bowden said “We know that the threat of poison baits is the biggest single challenge to vulture populations worldwide, usually when people try to poison dogs or large carnivores but accidentally killing vultures. Although diclofenac and other veterinary drugs used on cattle have had the biggest negative impact on vultures across Asia, and this issue still urgently needs more work, addressing the poison-baits threat does need more attention. We can learn from other regions, notably Africa, how it is being addressed elsewhere”.

For wider context on this, consult the SAVE Blueprint and the CMS Vultures Multi-species Action Plan. A report on poison-response training workshops carried out in Cambodia in 2020 will also be posted shortly on the SAVE website, which will further detail what SAVE is planning on this topic.

DNPWC, together with all partners involved, have already agreed at an emergency meeting to facilitate testing of the samples, prepare a full report, and to take steps to avoid this occurrence in future, involving the Wildlife Crime Control Bureau of Nepal.

Unfortunately there have also been similar events, involving slightly fewer birds, in nearby India in recent months, notably events in West Bengal and Assam, but this is the most serious event on this scale that we are aware of from Nepal.

Recent news on the Nepal release programme here and here