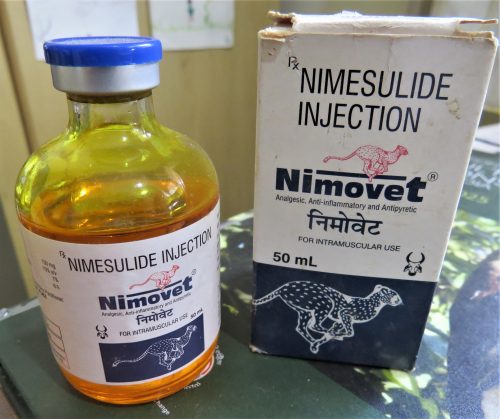 An important paper published recently documents the deaths of four endangered vultures in Gujarat, India with the evidence clearly indicating that they died of gout, typical of NSAID (Non-Steroidal Anti-Inflammatory Drug) poisoning, and where nimesulide was detected at high levels in the vulture tissues. Nimesulide, an increasingly popular veterinary painkiller and NSAID used for treating cattle in India, has recently been shown in trials to have lethal effects, although this work is still being prepared for publication.

Lead author Dr Murali Subramanian of SACON, one of India’s leading centres of excellence in wildlife toxicology, said that detecting these drugs in vulture carcasses depends on getting samples from freshly dead birds, which in this case was possible thanks to the team in Gujarat.

Co-author Aditya Roy said “Once the dead vultures were reported, we were able to carry out post mortems and collect the necessary tissue samples. The post mortems revealed gout symptoms, typical of NSAID intoxication, but we still needed the sophisticated analysis carried out at SACON by Dr Nambi Rajan and team to determine the exact cause of death.”

Prof Rhys Green of Cambridge University and Chairman of Saving Asia’s Vultures from Extinction (SAVE) said “This important evidence provides compelling additional support for the case that the license for veterinary use of nimesulide should be withdrawn immediately. A previous study reported the same combination of lethal visceral gout and high nimesulide concentrations in tissues in four more wild vultures found dead over ten years ago, between 2008 and 2011 (Cuthbert et al. 2016: Oryx, 50, 104-112). The new study adds to this that nimesulide was also found in the gut, showing that the dead birds had recently fed upon contaminated meat. Other drugs that cause the same problems, such as ketoprofen and aceclofenac, should also have their licences withdrawn.”

Prof Green added: “This is a practical solution because safe and affordable alternatives such as meloxicam are readily available. The recent ban of veterinary ketoprofen by the Bangladesh Government earlier this year is a good example, and one that India should replicate for the veterinary products nimesulide, aceclofenac and ketoprofen as well as other drugs where the safety is not yet established. Such steps are essential if vultures are to have a future across Asia, and India has the biggest responsibility here.”

For more information on nimesulide see this summary of evidence.