The ultimate goal of any breeding programme involving critically endangered species is to be able to supplement wild populations to prevent their extinction. But within this overall aim, there are several other criteria that ideally need to be met. These include released birds behaving in ways similar to their wild counterparts; to successfully breed, perhaps founding or enhancing nesting colonies near to the release site; and to travel widely, and breed in more distant colonies. Recent news from Nepal suggests that this is now happening with the White-rumped Vultures (WRV) released at the Vulture Safe Feeding Site (VSFS), and fitted with GPS transmitters, at Pithauli, near Chitwan National Park.

# C5: Last year, we announced that a pair of captive-reared WRV (# C1 & C4), both released as adults in 2019, successfully fledged a chick around the feeding site, the first released birds to do so. Well, this year, bird # C5 has gone one (big) step further; a captive-reared female released as an adult in 2019, and now at least 12 years old, has been found sitting on a nest c.190 km to the west of the VSFS. The colony was only discovered when we went looking for this GPS-tagged bird to confirm she was OK! What is also particularly satisfying about the success of C5 is that she was picked up weak in the spring of 2020 and taken into care. Mirroring the behaviour of several of the other released birds, she left the VSFS on 22nd April 2020, heading west. Unfortunately, on 17th May, she was found in a weakened state and taken into care in the village of Aunrahwa, c.150 km away in Uttar Pradesh (UP), India. However, after being cared for locally, she was fit enough to be released back into the wild a week later, since when she has made this corner of UP on the Nepal border her home. Although nesting in Nepal (c.20 km north of where she was released), she has spent a large proportion of her time on the Indian side of the border. 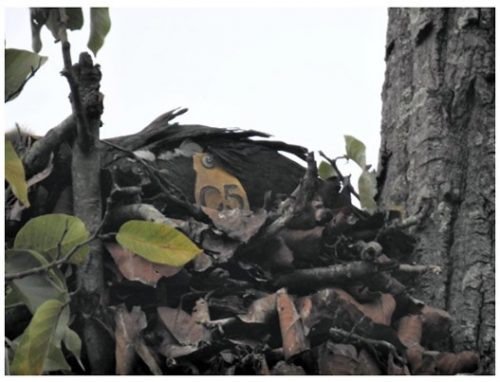 # 39:  Bird # C5 is not the only bird that has managed to get over some early problems with its fitness to go on to nest. # 39, a captive-bred bird, i.e., actually hatched in captivity as part of the breeding programme, was another bird that decided to leave the VSFS and go ‘walkabout’ in spring 2020. In fact, this bird may have joined up with a flock of migrating Himalayan Griffons, as it was picked up weak high in the mountains in the Manaslu Conservation Area, just 20 km from the Tibetan border, at an altitude of 3,500 m. It was returned to the VSFS, and re-released after regaining fitness, and is now nesting nearby!

#44: Another captive-bred bird has made history for the Nepal breeding programme. Hatched as part of the conservation breeding programme in 2016, and released in September 2018, the bird, # 44, a female, has produced a chick, the first captive-bred bird to have done so! It had attempted to nest last year with a ‘wild’ bird, but failed to produce an egg, so it is great news that this year she has been successful. Nesting in the vicinity of the VSFS, # 44 and its mate actually took over last year’s nest of the aforementioned pair # C1/C4, who built another nest just a couple of metres below in the same tree! Somewhat surprisingly, while we have been monitoring the nest, another captive-bred bird, # 38, has been seen visiting the nest and caring for the chick, a rare occurrence in White-rumped Vultures, although we have seen another bird helping with incubation of another pair’s egg.

#44 may just be the start, as other captive-released and captive-bred birds have been seen indulging in nesting activity. We eagerly await the outcome of our April nest surveys to confirm whether any birds have followed in her footsteps and also successfully bred…. 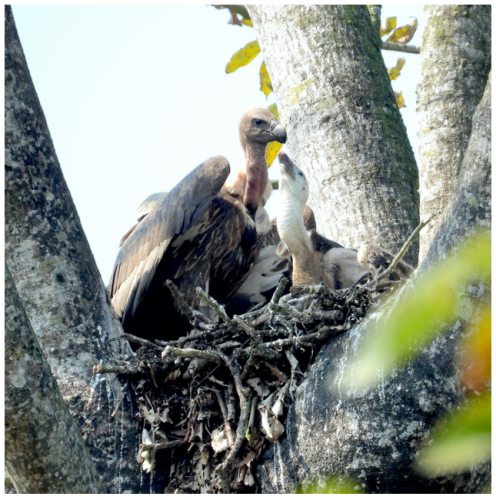 #E0: Finally, a mystery is unfolding – where exactly is #E0, a wild WRV caught, tagged and released in October 2019 going?! For two years, the team have been monitoring the movements of this bird; it successfully bred last year at a colony close to the VSFS,  and has never been more than 150 km from where it was tagged. It has spent almost all its time within the newly established Vulture Safe Zone. Then, on 22nd February, it left the VSFS, taking a circuitous route north, before leaving the VSZ the next day. Over the last two weeks, the bird has traversed the states of UP and Madhya Pradesh in India, skirting the edges of the world-famous Tiger Reserves at Bandhavgarh and Kanha. Having reached Maharashtra, 70 km east of Nagpur, and over 850 km from the VSFS in Pithauli, it has now turned around, and is heading back through Madhya Pradesh, travelling at about 100 km per day! As to what it is doing, nobody knows; why did it decide to take off? Will it stay in this area, or is it already heading back to Nepal? Only time will tell…… 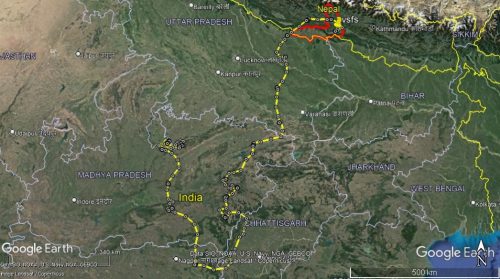 The route taken by wild White-rumped Vulture, #E0, from 22nd February to 16th March. The newly-declared Vulture Safe Zone in Nepal is shown in red.