As reported in the Indian press, ‘The Hindu’ – The office of the Director of Drugs Control, Tamil Nadu has registered over 100 cases against suppliers, distributors, manufacturers, and retailers of diclofenac. Since the 2006 ban of veterinary diclofenac, and the vial size restriction to 3ml needed for human use, this is the first time we are aware of that those contravening the bans are being prosecuted.

Diclofenac has been used widely by veterinarians as a painkiller and was the main cause of the dramatic 99% vulture declines across Asia. Although it is clear that human formulations have been illegally used on a large scale, this is an important step to discourage this irresponsible practice.

Tamil Nadu’s decision to enforce the vial-size ban on diclofenac for use in cattle is one of the rare instances in which policies formulated to protect vultures is being implemented by local governments, said S. Bharathidasan, of Arulagam, a SAVE Partner non-governmental organisation that has been working towards vulture conservation in Tamil Nadu. “The government has also actively moved to curtail the use of other non-steroidal anti-inflammatory drugs, such as ketoprofen and flunixin, in the Nilgiris, Erode and Coimbatore — the few vulture strongholds in the State,” he said.

Chris Bowden, RSPB’s Globally Threatened Species Officer and Programme Manager for SAVE, said the State was once again demonstrating its commitment to vulture conservation by preventing the sale of large vials of diclofenac, making it harder for veterinarians and cattle-owners to use the drug.

“There are safe alternative drugs available, so there is no justification to allow this illegal practice of continued diclofenac use. Meloxicam and tolfenamic acid are cheap and safe options and out of patent, so drug manufacturers and suppliers should be focusing on producing them and help the vulture populations recover,” said Mr. Bowden, who is also the co-chair of the IUCN vulture specialist group.

“If diclofenac can be fully removed from veterinary practice across India, we can start releasing vultures from the breeding programmes, and look for population recovery. There is one final step required though: to regulate the use of three other dangerous drugs — aceclofenac, nimesulide and ketoprofen – all proven vulture killers. But with safe options available, this step seems a small price to pay for saving India’s nine vulture species from extinction,” he added.

The government of India formally restricted diclofenac vial size in 2015 following evidence presented by the Bombay Natural History Society (BNHS) team, and this has been largely adhered to across India and has undoubtedly helped reduce the threat that diclofenac poses to the few remaining vultures. The ban was even challenged in Madras High Court by two pharmaceutical companies in 2016, but the ban was upheld by the judge in 2017, again thanks partly to efforts of Arulagam, BNHS and SAVE.

BNHS Director, Bivash Pandav commented that “This commendable step by Tamil Nadu needs to be followed by all states across India, and together with national bans of other toxic veterinary drugs like nimesulide and aceclofenac, so that vultures will have a real future as our environmental cleaners” 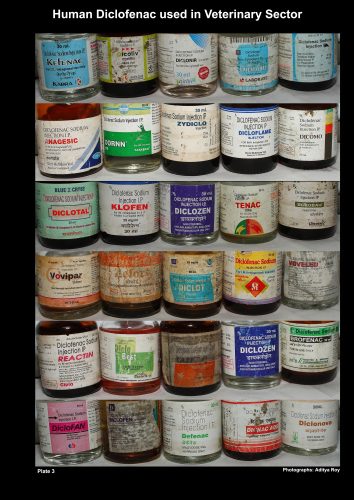 Large 30ml diclofenac vials like these were made illegal in 2015, but illegal supplies have continued in some areas. They are not required for human use, but are all too convenient for illegal use for cattle. Photo credit: Aditya Roy