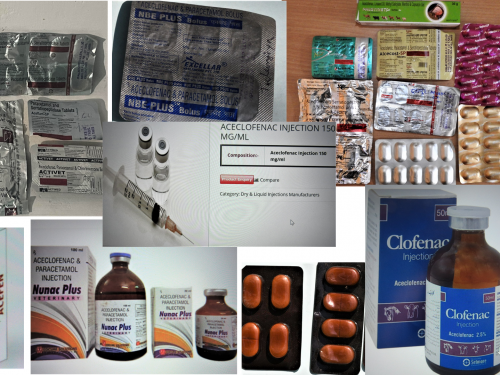 The veterinary painkiller drug aceclofenac very quickly metabolises into diclofenac in cattle, and an important new study by the Indian Veterinary Research Institute (IVRI) and collaborators shows that the same is true in water buffalo as well as in cows.

Diclofenac used as a painkiller for cattle (an now banned for veterinary use in many Asian countries) is well established as the main driver of the catastrophic vulture declines across Asia – so this finding is further proof that aceclofenac, which has already been put forward over four years ago as an unnecessary threat to vultures, should be totally banned. Safe alternatives (meloxicam and tolfenamic acid) are available, but despite the earlier requests to the Indian Government, and an ongoing Delhi High Court case, no such action has been taken so far.

Dr AM Pawde, a co-author of the paper, Principal Scientist and Incharge IVRI said “This study alone gives ample evidence that aceclofenac almost immediately converts to diclofenac inside cattle and also buffalo, and is therefore a very serious threat to vultures that feed on the carcasses of any recently treated animals”

Dr Karikalan M, another IVRI author, explains that “aceclofenac is described as a pro-drug of diclofenac, and soon after it enters the livestock, it actually becomes diclofenac, and indeed, when analysing the animal tissues, it is almost impossible to distinguish, and it is effectively the same as injecting directly with diclofenac which is already banned.”

Prof Rhys Green of Cambridge University, UK  (and SAVE Chairman) added that “Knowing just how lethal diclofenac is to vultures, and the devastating effect it has had, it seems like a very unfortunate loophole to allow aceclofenac to be manufactured, sold and used in veterinary use, undoing all the earlier efforts to secure India’s vultures.”

Dr John Mallord, a senior scientist of the RSPB added that “There really doesn’t seem any need to use veterinary aceclofenac, especially now that there are proven safe alternatives with very similar properties, like tolfenamic acid and meloxicam. We are also hopeful that paracetamol can be added to the known vulture-safe list in the near future. But some more work is needed to fully confirm this.”

BNHS Director, Bivash Pandav, acknowledged the Indian Government demonstrated its commitment to vulture conservation through banning veterinary diclofenac in 2006 and with support for IVRI vulture safety testing, adding that “Such work to test the safety of these veterinary drugs for vultures is crucial, but the key step needed now is for the MoEFCC and the drug controller general of India to convert these findings into the necessary action – and in time to prevent their extinction, and help vultures recover from the devastating 98% declines – so they can once again play their environmental role as natures cleaners. “

Wildlife Division, MoEF & CC, Haryana Forest Department is appreciated for providing the facilities and funding to conduct this research.

For more details of various veterinary drugs and their toxicity to vultures, and the steps taken so far are available on the SAVE webpage: https://save-vultures.org/alerts/