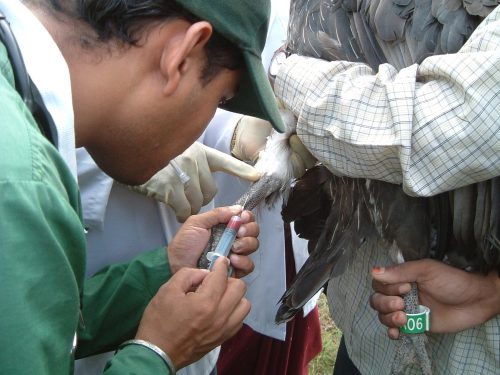 Research has underpinned the vulture conservation programme from the very beginning. The first evidence of declines was from Keoladeo National Park, India. Surveys and monitoring established that declines were occurring at a national and international scale, and triggered a four-year investigation in to the cause of the declines. Research has now clearly established that diclofenac is the principal cause of the population declines. Research also identified the safe alternative drug meloxicam that could be promoted as a replacement for diclofenac but found that another non- steroidal anti-inflammatory drug (NSAID), ketoprofen, is toxic to vultures. Science and research published in peer-reviewed journals continue to be an important part of the vulture programme, with a varied range of projects aimed at monitoring populations, understanding the behaviour of birds, furthering research on the toxicity of NSAIDs and documenting the health status of vultures and  lessons to be learned from the breeding programme.

Bird Conservation Nepal (BCN) and the Bombay Nature History Society (BNHS) have been supported by the Royal Society for the Protection of Birds (RSPB) and Zoological Society of London (ZSL) to monitor colonies and conduct road transect surveys of vultures and the latest published summary of this was in Prakash et al 2007. This allows population trends to be monitored for resident vultures and highlights breeding colonies in need of protection through working with local communities. An update was published at the end of 2011. The latest trends in Prakash et al 2007 show declines exceeding 40% per year for Oriental White-backed vultures, and an almost unbelievable 99.9% decline already having taken place since the early 1990s.

The project aims to facilitate the identification of safe alternatives to diclofenac and introduce these into the veterinary marketplace. This work has involved a survey of the clinical use of NSAIDs in vultures and other scavenging birds and is involving safety testing of alternative NSAIDs on vultures in Southern Africa and India.

Many millions of doses of diclofenac have been used by vets and farmers across South Asia as painkiller for cattle and other animals. Therefore finding a safe alternative was a key step to removing it from the system. Fortunately one such alternative, meloxicam, has been identified. Ketoprofen has been tested on vultures and found to be toxic, but so far there has been no government action to ban its veterinary use. Other alternative drugs are also in use and being introduced to the veterinary painkiller market, but their safety to vultures is completely unknown.

Research into a safe alternative drug has being undertaken by the RSPB, in collaboration with the Indian Veterinary Research Institute (IVRI), the Bombay Natural History Society and the Faculty of Veterinary Science at the University of Pretoria (South Africa) and the Rhino & Lion Wildlife Conservation’s Vulture Programme. In order to help identify safe alternatives we first undertook a
questionnaire survey of veterinarians at zoos, raptor rehabilitation centres and raptors collections, asking them for evidence of the safety of toxicity of NSAIDs. These results identified meloxicam as a potential safe drug, as well as raising safety concerns about the NSAIDs carprofen, flunixin and ketoprofen (see ‘Cuthbert et al 2006′ and ‘Toxicity of NSAIDs to Gyps vultures: a new threat from ketoprofen’). Testing of the safety of meloxicam was undertaken on captive non-releasable African white-backed vultures, an abundant and non-threatened species widely distributed across Africa. Visits were also made by researchers from BNHS and IVRI to ensure that testing methods were appropriate for later use in India. After testing meloxicam, at increasing doses with these captive birds, a larger number of wild African white-backed vultures were captured in Namibia, through the assistance Maria and Jörg Diekmann, and the Rare and Endangered Species Trust (REST). Over a long weekend, Maria and Jörg with the assistance of a large group of experienced and keen volunteers successfully captured 66 African white-backed vultures. A total of 20 of these birds were treated with meloxicam at the estimated maximum level of exposure that vulture could potentially encounter this drug (estimated from a bird consuming 1 kg of liver tissue from a cow dying shortly after receiving a standard veterinary dose of meloxicam). All of the birds survived and their blood parameters and behaviour were normal. A paper detailing the results of this safety testing work was published in early 2006 (Swan et al 2006), helping provide crucial momentum to the advocacy programme’s efforts to ban diclofenac, by providing vets with a vulture safe alternative to diclofenac.

Following these trials in Southern Africa, work on the safety of meloxicam was repeated on two of Asia’s critically endangered vulture species (white-backed and long-billed vultures) held at one of the captive breeding centres, as well as testing the safety of meloxicam to other scavenging birds. The trials again found no indication of harm, with all birds surviving and no evidence of elevation of the concentration of uric acid in the blood, which occurs shortly before death in vultures treated with diclofenac. This trial and the work in South Africa tested meloxicam by administering it directly to vultures (by giving it orally through a tube) and by feeding tissues of livestock that were slaughtered shortly after they had been treated with a veterinary dose of the drug (thereby replicating the way that wild birds are exposed to meloxicam). The work in India was  published providing further impetus to the promotion of this safe drug in Asia (Swarup et al 2007).

As part of the vulture work, the RSPB has worked closely with BNHS, the IVRI, the University of Aberdeen and the Instituto de Investigación en Recursos Cinegeticos, Spain, in order to quantify levels of diclofenac in cattle carcasses available to vultures in India. Additionally, visits and surveys of pharmaceutical shops have been made across Nepal and India to measure the availability of different veterinary drugs.

SAVE monitors diclofenac, meloxicam and approximately ten other NSAIDs in pharmacies selling veterinary drugs and in livestock carcasses left for scavengers to consume.

We collect data from pharmacies both covertly and overtly. Covert surveys are necessary to obtain accurate data on illegal diclofenac sales; whereas overt surveys are used to find relative abundance of all NSAIDs. Pharmacy surveys represent a quick and easy way of determining what NSAIDs are likely being used in a given area. Pharmacy surveys have revealed that human formulations of diclofenac are regularly sold to treat livestock in Bangladesh, India, Nepal and Pakistan (SAVE 2015). In addition, pharmacy surveys have shown that the availability of other vulture-toxic NSAIDs, such as ketoprofen and nimesulide, are widespread and increasing throughout South Asia (SAVE 2015). Diclofenac and other vulture-toxic NSAIDs have not been found in pharmacies selling veterinary medicines in Cambodia (SAVE 2015).

We sample liver tissue from mainly cattle and buffalo carcasses left for scavengers to consume in India and Nepal. These samples are analysed for presence and concentration of NSAID residues using liquid chromatography mass spectrometry. Currently we can detect nine NSAIDs, including diclofenac, meloxicam, ketoprofen and nimesulide, and are developing our method to detect more NSAIDs. Carcass surveys provide us with the prevalence of each NSAID in vulture food; and thereby is a proxy for actual NSAID use. Carcass surveys have shown that diclofenac use in India has halved since the ban on veterinary diclofenac; and meloxicam use has increased by almost one half (Cuthbert et al 2014). Note that meloxicam use has not completely replaced diclofenac use, which means that some NSAID-users are using either another vulture-toxic NSAID (e.g. ketoprofen) or an untested NSAID (e.g. piroxicam) instead (Cuthbert et al 2014).

SAVE conducts rigorous experimental safety-testing of NSAIDs on Gyps vultures with the aim to determine both vulture-toxic and vulture-safe compounds. Safety-testing can result in mortalities of vultures through NSAID poisoning; however, our experiments are designed to minimise vulture mortalities and meet international animal ethical standards. Safety-testing showed that diclofenac was vulture-toxic (Oaks et al 2004); leading to studies showing that diclofenac was the cause of declines in South Asia (Green et al 2004, 2007) and the ban on veterinary diclofenac. Safety-testing showed that meloxicam was vulture-safe (Swan et al 2006), providing NSAID-users with an alternative to diclofenac. Further safety-testing has shown that aceclofenac (Galligan et al. 2016), carprofen (Naidoo et al in review) and ketoprofen (Naidoo et al 2009) are vulture-toxic. The next NSAID we will safety test is nimesulide, which has been found in association with visceral gout in dead Gyps vultures in India (Cuthbert et al 2015).

Examining dead raptors for cause of death

SAVE searches for dead raptors (ie Gyps vultures, non-Gyps vultures, eagles and other birds of prey) at regular feeding and nesting sites, as well as opportunistic collection of raptor carcasses, throughout South Asia. All dead raptors are examined for cause of death and tissue samples are collected for NSAID analysis. Through this work, we are expanding our knowledge of what species are threatened by veterinary NSAIDs (see Sharma et al 2012) and what veterinary NSAIDs are toxic to raptors (Cuthbert et al 2015).

Ecology and causes of death in red-headed vultures

SAVE is studying the ecology and cause of death in Asia’s often forgotten critically endangered vulture: the red-headed vulture. This species has an ecology that is different to that of the Gyps vultures and not well understood. It is likely that this species is intolerant to diclofenac (Galligan et al 2014) and that actions to conserve Gyps vultures are benefiting it; but neither idea has been confirmed.

SAVE aims to monitor both wild and captive-release vultures with satellite telemetry (“tagging”). Such monitoring will provide data on vulture movement, ranges and behaviours; and lead us to important sites, like nesting sites. By tagging both wild and captive-release vultures we can assess how the latter are assimilating in to the wild. If tagged birds are ill or injured we can locate and treat them; and, if a vulture dies, we can locate and examine them. Satellite telemetry is the only way to obtain such data. Currently, we are trialling tags and methods.

Costs of the loss of vultures

SAVE investigates the environmental, economic and cultural costs associated with the loss of vultures in South Asia. The ecosystem service of South Asia’s vultures is apparent: vultures efficiently consume vast numbers of livestock carcasses left to scavengers and thereby outcompeting microbes, insects and dogs that can cause human and livestock diseases and would otherwise need to be controlled. This service is yet to be shown clearly, but could be achieved by showing changes to the actual monetary cost of sanitation and disease control in a number of locations before and after the vulture declines.

Access some of the key research papers and reports that underpin our programme here.