Since 2017, 31 captive-reared and captive-bred1 White-rumped Vultures Gyps bengalensis have been released and fitted with GPS telemetry tags, which allows us to monitor the movements and survival of these Critically Endangered birds. By following them, along with 30 wild birds also fitted with GPS tags, and investigating the cause of mortality of any vultures that die, we can ensure that diclofenac and other non-steroidal anti-inflammatory drugs (NSAIDs) no longer pose a threat. The good news so far is that, after more than two years, we have found no evidence that any tagged birds have succumbed to NSAID-poisoning. This is vitally important, as it enables us to confirm that the provisional Vulture Safe Zones are proving safe for vultures and will, in time, allow us to declare these areas as genuine VSZs – the first in the world, free of diclofenac and other harmful NSAIDs

Wild birds tend to range widely, frequently up to 200 km from the feeding site at Pithauli, to which they only occasionally return to take advantage of the food that is still provided twice a week. The record so far, however, is held by a bird that travelled about 1100 km from the release site, all the way to Jammu and Kashmir in India.

The released birds, on the other hand, have tended to remain far more local, until recently only travelling a maximum of 6 km from the release and feeding site. However, as this year’s particularly bad winter has come to an end, some of the vultures have begun to undertake movements not previously seen by released birds. Nine of the birds have been seen to take journeys of over 20 km, with the furthest-ranging bird travelling 193 km from the release site (see Map). Two of the birds have travelled across the border into India. 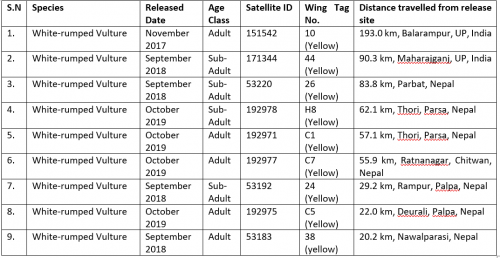 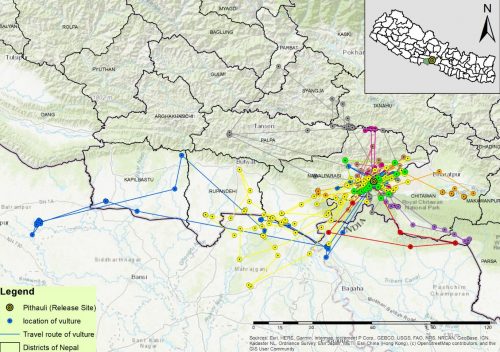 Most of the wild tagged birds are now busy rearing their chicks. At the start of this breeding season, we found three pairs of released vultures nest building and mating frequently. As this was their first breeding attempts, the nests were quite weak, and the birds did not complete their breeding activity; however, this was an important development in our conservation breeding and release programme, and it is hoped that the same pairs, and perhaps others, will nest again in the upcoming year. The photo below shows birds C6 and 13, released in 2019 and 2017 respectively, nestbuilding in the vicinity of the release site.

Bird Conservation Nepal leads the release work with full support of the Department of National Parks and Wildlife Conservation, Chitwan National Park, National Trust for Nature Conservation and Community of Kawasoti, Nawalparasi. The Royal Society for the Protection of Birds (UK) provides much of the technical and financial support for the work along with technical expertise of the Zoological Society of London (UK) and International Centre for Birds of Prey (UK).

1Captive-reared birds are those that were wild-bred and taken into captivity as nestlings, reared and then released as adults. Captive-bred birds were born in captivity and released into the wild at less than two year of age.